Pick-By-Pick Analysis of the First Round 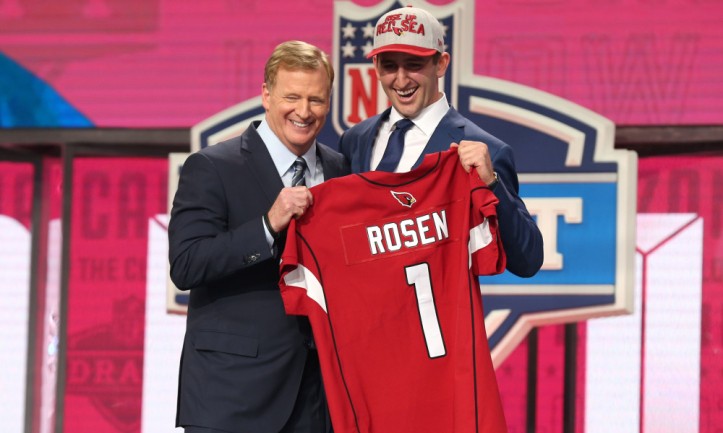 The first round of the draft did not disappoint. Unrivalled drama, an abundance of trades, falling quarterbacks. It had it all. Here are my thoughts on every pick.

The Browns could have gone a number of different ways with this selection, but they made the right choice here. They couldn’t afford to pass on a quarterback at #1 again, and Baker is the best quarterback in the class. His passion, leadership and highly-accurate arm is exactly what the Browns need at the quarterback position.

Throughout the pre-draft process, we heard that Dave Gettleman was infatuated with Barkley and this proved to be true. Barkley is the most talented player in the entire class so it’s hard to criticise the pick, but I would have liked to see them nab Josh Rosen and have him sit behind Eli for a year.

The Jets finally get their franchise quarterback (or so they hope). I’m not a huge fan of Darnold but I do think he could be a starter in the league for 10+ years. He’s an excellent leader and has a fantastic arm, which will hopefully breathe some life into the organisation. Again, I would have preferred Rosen here. 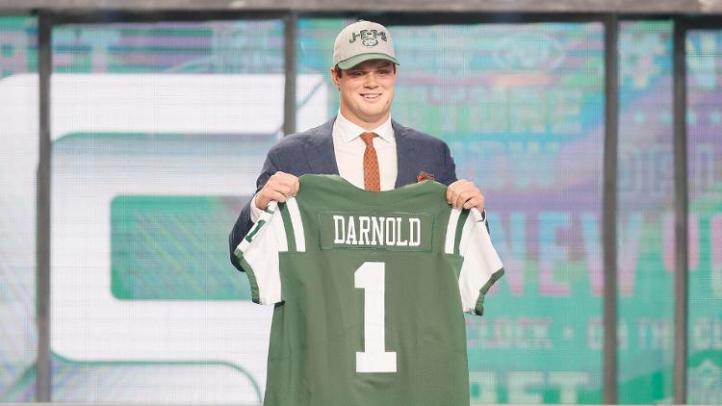 The Browns pull off another shock move here, and I don’t hate it. Ward is the best cornerback in the class and is an excellent addition to a defense that’s already quite dangerous-looking. Speed, ball skills and great instincts. Nice job Browns.

The Broncos surely didn’t expect Chubb to fall to them here so they snap him up, despite rumours of a trade-down with the Bills being on the table. A quarterback or some secondary help would have made sense here, but Chubb and Von Miller will form a monstrous duo off the edge. It’ll be interesting to see what they plan to do with Shane Ray.

Love this pick. The goal for this season should be to protect Andrew Luck at all costs, and what better way to do that than by grabbing the best interior linemen to enter the draft in years.

The Bills gave up two second rounders to move up from #12 and take who they believe to be their future franchise quarterback. I’m not buying it. Allen is worth taking a chance on in the first round, but moving up to take him in the top ten and giving up two valuable picks in the process is an ill-advised move. It doesn’t help matters that the Bills’ roster is atrocious, which will seriously stunt his development. Here’s a shocker: I would have loved Rosen here.

Great pick. Smith is a sideline-to-sideline player with outstanding burst and closing speed. He has the coverage skills to play on third downs too, and should be a great fit in Fangio’s defense.

When you make Jimmy Garoppolo the richest player in NFL history, you better make sure to give him some protection. McGlinchey is a slight reach in the top ten for me, but you have to keep Garoppolo upright.

Best pick of the night. I love Rosen, and he finds himself in a great situation in Arizona. He can sit behind Bradford for as long as he can stay healthy, and when he steps into the lineup he’ll be joined by David Johnson in the backfield to take some of the pressure off him. In all honesty, Rosen would be ready to start from Day 1 but it makes sense to have him learn behind Bradford for a while. Rosen is a franchise quarterback, and he’ll make the Jets and Bills pay for passing on him.

Another great selection. Minkah should never have fallen out of the top ten. His football IQ is off the charts and he has the versatility to play as a box safety, in the slot or as a deep safety. He’s just an excellent, well-rounded football player, and a top five talent in this draft.

Meh. There were much better players left on the board, and I hate the idea of drafting a two-down player this high in the first round. The Bucs have done a nice job of turning their defensive line from a weakness to a strength, but I’m not a big Vea fan.

The pick makes sense, but I don’t love the value. The Redskins desperately needed some interior defensive line help, but Payne is a borderline first round pick at best. Drafting him at #13 is a reach.

Worst pick of the night. Giving up next year’s first round pick to move up to this slot only makes sense if it’s a quarterback. I’d be more forgiving if it was a non-quarterback that was ready to contribute right away, but Davenport is a raw, small-school prospect with serious question marks. Investing two first round picks in him is ludicrous. This feels like an attempt at a win-now move, but it’s a catastrophic failure. Just awful. 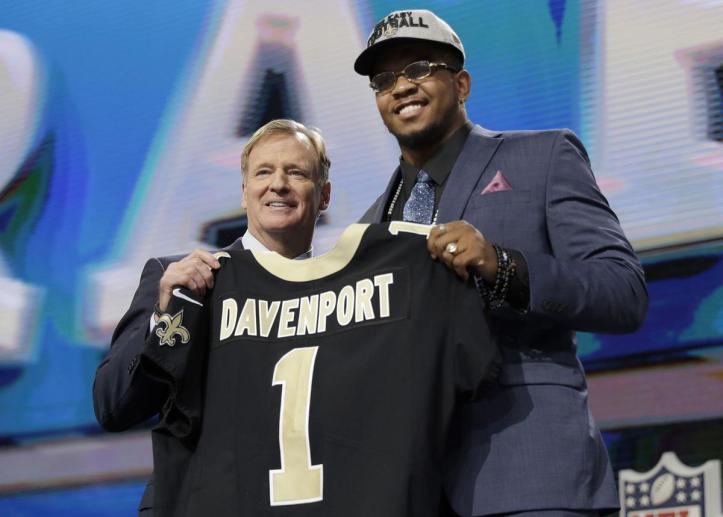 The Raiders managed to pick up an extra 3rd and 5th round pick by moving down to #15, but then proceed to grab a Day 2 talent here. Miller got consistently worked at UCLA and he’s far too raw to warrant this kind of selection. Gruden then moved the 3rd round pick they picked up in the trade with Arizona for Martavis Bryant, a receiver with a troubled past and with just one year left on his contract. Ew.

Just when I think the Bills couldn’t possibly be any dumber, they go and do something like this. AND TOTALLY REDEEM THEMSELVES. Edmunds is a stud, and at just 19 years old he could develop into a star in this league. He’s a physical freak who consistently shoots gaps, excels in coverage, and offers tremendous upside as a pass rusher.

No way the Chargers expected Derwin to fall this far, and he makes a ton of sense for them. I’m not as high on Derwin as most, but I’m sure Gus Bradley feels that he can play the Kam Chancellor role in his defense.

Very successful night for the Packers. They swapped first round picks with the Saints, picking up New Orleans’ 2019 first rounder in the process, and then moved back up to select one of the top cornerbacks in the class to pair with last year’s 2nd round pick Kevin King. Alexander is feisty, competitive and super smooth.

I expected a receiver here but Vander Esch really helps the Cowboys’ defense. Sean Lee is injury prone and we don’t know if Jaylon Smith can play or not. If Lee can stay healthy and Smith shows that his knee injury is no longer affecting his play, Vander Esch steps in and completes a really talented linebacking corps. 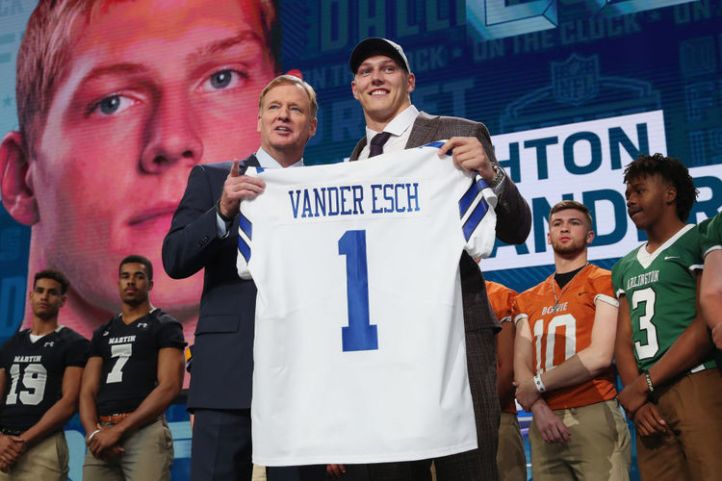 Really solid pick here to kick off the Matt Patricia era in Detroit. Ragnow is a supreme athlete with outstanding second-level blocking ability. Not a flashy pick by any means, but a smart move that really benefits their franchise quarterback.

I slumped back into my couch when Goodell uttered the words “Frank Ragnow” at pick #20. I was a defeated man. Ragnow would have been the Bengals pick if he was available at #21, and I would’ve been ecstatic. Price is a limited athlete with short arms, and isn’t a first round talent. However, after a night to sleep on it, I’ve stepped back off the ledge. Price is a big upgrade at the center position, and should be able to start from Day 1. It’s a solid pick.

The Titans jumped up a couple of spots to make sure they got their guy, and it’s a smart pick. Evans fills a huge need on the Titans’ defense. He’s a classic thumper at linebacker, and plays with excellent toughness and physicality. He’ll smack you in the mouth, but is also quick and springy in the box.

Great value pick for New England. It sounds like they’ll try Wynn at tackle, and why not. He’s athletic, has a great anchor and has pretty good feet. If he ends up being kicked inside to guard, he’ll excel there.

I don’t get the D.J. Moore buzz. He’s small (and plays small), doesn’t run sharp routes and isn’t a dominant force on the outside. I think Sutton or Ridley would have been much better picks here. I’ve just never understood the first round love for Moore.

Horrendous pick. Hurst is 25 years old, scored 3 touchdowns in his three years at South Carolina, and has no real standout trait. He’s a late Day 2 talent at best in my mind. The Ravens continue to do a really poor job of drafting tight ends.

This one was a big surprise, but that offense is going to be electric. Julio, Ridley, Sanu, Freeman and Coleman is as good as it gets for an NFL offense. Ridley is a smooth route runner with outstanding body control. I like the pick.

A real head-scratcher. The Seahawks had to add some offensive line help here, and there were plenty of talented guys on the board that would have fit the bill. Really disappointing.

This rivals the Saints’ selection of Davenport in terms of pure stupidity. Edmunds was a Day 3 talent according to most.

Taking Lamar here would have been amazing. But the Jaguars are just minding their own business, building the most dominant defense in the history of the NFL and I kind of love it. Bryan is really talented. He’s a high intensity guy with great hands, a quick get-off, and excellent upper body strength.

This feels like a bit of a luxury pick, but there are very few holes on the Vikings roster. Hughes is a small corner but has great feet, agility, and loose hips. He’s a nice addition to that secondary.

Michel is a really fun player. He’s got vision, burst and excellent lateral quickness. He makes guys miss in the open field and finishes his runs by getting physical. The Patriots have bigger needs than running back, but Michel has drawn comparisons to Alvin Kamara and makes sense at this late stage of the first round.

Love it. Jackson can sit behind Flacco for a year, learn from RGIII about how to avoid making the mistakes that he did, and step into the lineup in 2019 and take the league by storm. I have worries about Jackson’s ability as a passer, but a year of watching and learning from the sideline should do him the world of good. I’m rooting for him.

Enjoy Day 2 of the Draft!