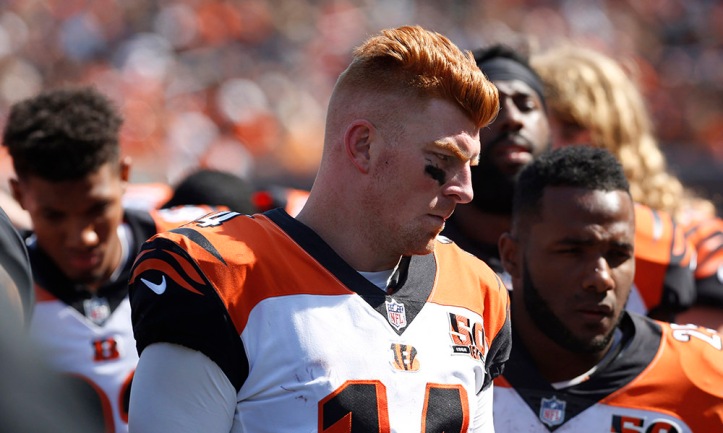 When the Cincinnati Bengals selected Andy Dalton with the 35th pick in the 2011 Draft, the Bengals were a team in disarray. Coming off the back of a depressing 4-12 season and amidst a great deal of controversy surrounding Carson Palmer’s future with the team, expectations could not have been any lower for what was perceived to be one of the worst teams in all of pro football.

Out of nowhere, the rookie duo of Dalton and AJ Green breathed new life into the franchise. In 2011, the Red Rifle became only the fifth player in NFL history to throw for over 3,000 yards and at least 20 touchdowns in his rookie season. The team finished with a 9-7 record and earned a wildcard berth. If not for Cam Newton’s historic rookie campaign, Dalton would surely have been in line to win Offensive Rookie of the Year honours.

Over the next few seasons, Dalton continued to develop nicely under two of the brightest offensive minds in the league. With Jay Gruden as his offensive coordinator, Dalton continued to improve on his fantastic rookie season, throwing for 3,699 and 4,293 yards in 2012 and 2013 respectively. The acquisition of Mohamed Sanu and Marvin Jones in the 2012 Draft was crucial to Dalton’s success, and they were a huge upgrade over the team’s previous receiving options such as Jerome Simpson and Andre Caldwell.

When Gruden left to take the head coaching job in Washington, in stepped Hue Jackson to take over the offense. With Jackson adopting a run-heavy approach, Dalton’s job became even easier. In Jackson’s first season as OC, Dalton attempted just 481 passes, compared to a whopping 586 the previous year under Gruden. The ball was literally taken out of Dalton’s hands, as Jeremy Hill and Gio Bernard rushed for a combined 1,804 yards. We may not have noticed this at the time, but Dalton was being hidden by his skill position players and offensive line.

The following year, Dalton had his finest season as a pro. Through 13 games he was averaging 250 passing yards per game, and boasted an impressive 25:7 touchdown to interception ratio. As Bengals fans will remember all too well, Dalton suffered a fractured thumb against the Steelers in Week 14, and would miss the remainder of the season including the team’s devastating playoff loss to Pittsburgh.

Throughout that entire period under Gruden and Jackson, the message for Dalton was simple: get the ball to your playmakers. He was never asked to do too much, and often the play design was such that Dalton didn’t even have to make a read post-snap. Outside of a bizarre 2012 season in which he was sacked 41 times, the Bengals’ offensive line was one of the most reliable units in the league. Andrew Whitworth was as consistent as any left tackle in the NFL, while Kevin Zeitler and Clint Boling formed a formidable duo on the interior. This gave Dalton the confidence to stand tall in the pocket and deliver accurate throws to his multitude of weapons.

Not only was his offensive line a huge factor in his success, but the defense throughout Dalton’s entire career has been phenomenal. In terms of points allowed, the defense has never finished worse than 12th in the league. As a result, Dalton has rarely been asked to put up a boatload of points in a shootout. There is a common theme here: make life as easy as possible for Dalton in order to allow him to make safe, easy throws.

In 2016, following the departure of Hue Jackson to Cleveland, Dalton regressed in a big way. He lost Sanu and Jones via free agency, and nobody stepped up to fill those voids. Brandon LaFell was serviceable at best, while rookie Tyler Boyd was confined to the slot and had a limited impact as a result. As well as that, the offensive line took a significant step back and allowed Dalton to be sacked 41 times. The team finished with a losing record for the first time in Dalton’s career, and the flaws in his play were beginning to become glaringly obvious. It was clear that Dalton simply did not have the talent to elevate the players around him.

The first three games of the 2017 campaign have been disastrous for Dalton. In my opinion, it has confirmed that Dalton is no longer deserving of the starting job. He is crumbling under the pressure, literally (literal pressure that is, Dalton isn’t physically disintegrating). The offensive line has been atrocious, but even when Dalton has been given time in the pocket, his decision-making has been woeful. He bails on plays far too quickly, dropping his eyes and looking to escape the pocket at the slightest hint of pressure. He has shown absolutely no ability to manoeuvre within the pocket, keep his eyes downfield, and progress through his reads. More often than not, if his initial read is not open, the play is as good as over.

Excellent scheming and top-notch offensive talent have put Dalton in a position to have relative success throughout the majority of his career in Cincinnati. Now that neither of those are present, we are seeing the true Andy Dalton. Even when his surrounding talent was up there with the best in the league, the greatest height he led the Bengals to was the wildcard round. We’ve been kidding ourselves for far too long that Dalton is anything other than bang average. It’s time for the coaching staff to pull the plug and see what they have in AJ McCarron, because Dalton is simply not the answer.