The Buccaneers’ offense will be special in 2017 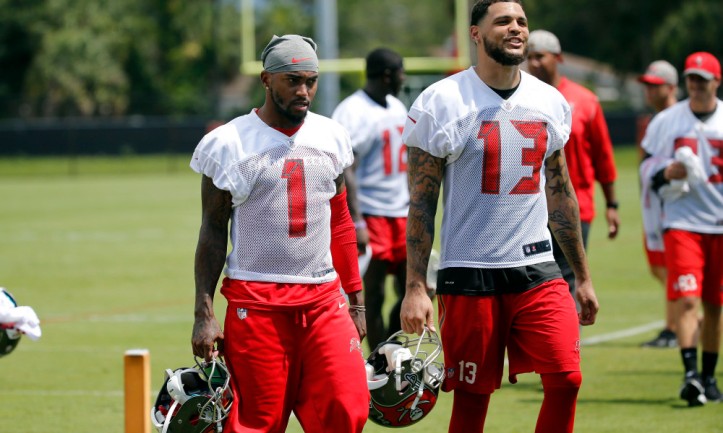 The Tampa Bay Buccaneers are a team on the rise. In Dirk Koetter’s first year as head coach, the team finished with a very respectable 9-7 record and just narrowly missed out on an NFC wildcard berth. While the Bucs’ defense should continue to develop nicely under defensive coordinator Mike Smith following a much-improved 2016 campaign, it is their offense that has the potential to propel the team to greatness in 2017. No team in the NFL has done more to improve their offense this offseason than the Bucs. Mike Evans has established himself as one of the most reliable number one receivers in the league, leading the NFL in targets last season with a whopping 173. That number is simply unsustainable, which is why it was imperative that GM Jason Licht acquired as many weapons for Jameis Winston as possible. Licht has done an outstanding job at constructing what I believe could be the most dangerous receiving corps in the NFL if they can gel well together. The offensive playmakers the team has added fit very specific roles within the team’s offense, and the combination of their respective skillsets is something that I think will make for one of the most explosive offenses in the NFL in 2017.

Mike Evans needs no introduction. The Texas A&M product has surpassed 1,000 receiving yards in each of his first three seasons in the league, and placed his name firmly in the top five receiver conversation with a dominant 2016 season in which he amassed 1,321 receiving yards and 12 touchdowns. At 6-foot-5 and 231 pounds, Evans possesses the ideal frame for a number one wideout. He is up there with Julio Jones and AJ Green as the receiver that you would want in a contested catch situation, and he is an absolute nightmare to defend against in the redzone. Evans will almost certainly see a dip in his production in 2017 due to the influx of talented pass catchers to Tampa Bay this offseason, but his role in the offense will be just as important as in previous years. He is Winston’s go-to guy, and will continue to be for years to come.

The most exciting addition to Tampa Bay’s offense this year has to be speed demon DeSean Jackson. Arguably the most dangerous deep threat in the NFL over the past decade, Jackson is exactly what this offense needs. In Evans, you have a physically imposing possession receiver with an insane catch radius, while Jackson provides the home run speed on the other side of the field. Evans can say goodbye to seeing any more double coverage for the most part, as defenses will be forced to keep a safety over the top of Jackson at all times. You would be hard-pressed to find two receivers whose skillsets differ more than Evans and Jackson, and that is why I expect them to work so well together.

While Jackson was a sexy free agency acquisition, the third round of the draft is where the Bucs may have found a future star. Penn State wideout Chris Godwin was an absolute steal at #84 overall, and I am utterly clueless as to how he fell as far as he did. I had not watched any Godwin film pre-draft, but having done so since, I can confirm the reports coming out of Bucs’ camp that this guy is a stud. He dominates in the middle of the field, where he uses his physicality to shield off defenders and make catches in traffic. He is a natural pass catcher with very strong hands, and despite standing at just 6-foot-1, he consistently reeled in passes with defensive backs draped over him. Godwin is also a very clever route runner who showed the ability to manipulate defensive backs with hesitation moves and body fakes. I think that Godwin is the perfect guy to man the slot in Tampa Bay, but he is more than capable of holding his own on the outside if the Bucs wish to give considerable playing time to Adam Humphries. Godwin surprised a lot of people by running a 4.42 at the Combine, and when you pair that speed with his exceptional ball tracking abilities, you have a guy who can be a force as an outside receiver.

In any event, the trio of Evans, Jackson and Godwin is one which will be extremely exciting to watch this season. I cannot overemphasise how well these players will compliment one another; you have a true number one receiver, one of the fastest players in the league, and a crafty, physical slot guy who can play outside in a pinch. And I haven’t even mentioned their first round rookie tight end yet.

The Bucs got another steal in April’s draft when Alabama’s OJ Howard fell to them with the 19th overall selection. Howard is a physical freak, coming in at 6-foot-6 and 251 lbs to go along with 4.51 speed. He offers great versatility to the Bucs’ offense as a player who can line up in-line and out wide. He has soft, natural hands, and he is an excellent blocker. His fluid movement skills are rarely seen in a player of his size, and I believe that he has the potential to be a top five tight end in the league a few years down the line. All this being said, he is likely to be behind Cameron Brate on the depth chart this season. Brate is no slouch, having hauled in 57 catches and 7 touchdowns in his breakout year last season, yet he remains overlooked by both fans and analysts. Look for the Bucs to try to get their talented rookie on the field as much as possible by regularly rolling with two tight-end sets. It is worth noting that tight ends have historically struggled to have much production early on in their professional careers, but as the team’s number two tight end, I wouldn’t expect very lofty expectations for Howard just yet.

Jameis Winston has had a lot on his plate since being drafted with the first overall pick in 2015; the talent around him simply hasn’t been there. Last season, only Philip Rivers (21) threw more interceptions than Winston (18), but this was largely due to shoddy offensive line play and a lack of weapons outside of Mike Evans. Winston will always be a gunslinger, but the immense talent around him now should allow him to tone that down a little. He does not need to take as many risks with the football, and can instead spread the ball around to his new playmakers. If all goes to plan, we should see Winston at the peak of his powers this season.

There is no doubt in my mind that the Buccaneers will be a legitimate force in the NFC this year. I am genuinely excited to see what their offense can do this season, and you should be too. If all of their new offensive weapons can mesh together as planned and if they can develop the necessary chemistry with Winston…watch out.